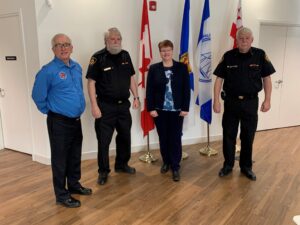 Both Ed and Mike are believed to be the only twins to wear the white helmet of Fire Chief. They were both members of the Lunenburg County Ground Search and Rescue Team and acted as assistant search directors. Both gentlemen have also been recipients of the MODL Volunteer of the Year award and in 2017 they and their family were awarded the Volunteer Family Award by the Province of Nova Scotia.

Municipality of the District of Lunenburg