Annual Report of the CVFSA Ontario Director to the 2018 AGM 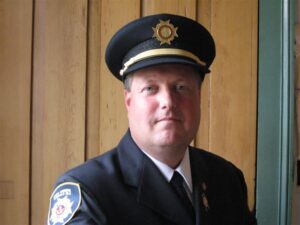 In October of 2017, the Canadian Volunteer Fire Service Association posted a notice for the office of Director for the Province of Ontario. I was privileged to be selected and installed in this position at the beginning of a Board of Directors teleconference on Feb 28, 2018. In this, I am impressed with the fact that CVFSA Directors regularly make use of fiscally responsible means to conduct business of this association.

Ontario’s firefighting community is unique in its own way, yet shares many of the same issues faced by other jurisdictions. Provincially our service is governed according to the Fire Protection and Prevention Act 1997 and the Fire Code is a regulation under this Act. Directives are issued by the Ontario Fire Marshal under authority of clause 9.(1)(b) in the Fire Protection and Prevention Act when there is a need to achieve consistency in the application of certain technical or administrative requirements. 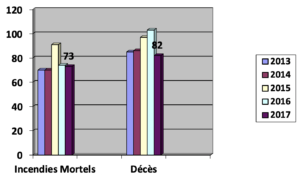 Summary of Fire Incidents:  Note: Data for 2017 is not available at this time.

In 2016 Ontario had 10,844 fires in totality with 723 fire injuries and 103 fire fatalities including 15 fatalities on Federal or First Nations properties. The estimated loss is recorded at $741.8 million dollars.

In 2015 the Province of Ontario had 10,951 fires in totality with 860 fire injuries and 97 fire fatalities including 3 fatalities on Federal or First Nations properties. The estimated loss is recorded at $722.6 million dollars.

In 2014 Ontario had 10,635 fires in totality with 814 fire injuries and 86 fire fatalities including 6 fatalities on Federal or First Nations properties. The estimated loss is recorded at $862 million dollars.

In 2013 the Province of Ontario had 10,733 fires in totality with 784 fire injuries and 85 fire fatalities including 6 fatalities on Federal or First Nations properties. The estimated loss is recorded at $639.8 million dollars.

Ministry of Natural Resources and Forestry

The Ministry of Natural Resources and Forestry manages wildland fires (grass, brush and forest fires) in Ontario according to the Forest Fires Prevention Act. That said, every municipality is responsible for the suppression of grass, brush and forest fires within its jurisdiction. The Ministry of Natural Resources and Forestry may enter into fire agreements with municipalities within Ontario’s West Fire Region and East Fire Region.  The agreements ensure the overall “least cost” in determining who should provide fire protection services on specific lands.  They also provide full cost recovery for both Ministry of Natural Resources and Forestry and municipalities. Total number of forest fires inside Ontario’s fire region for the 2018 fire season is 1317, the 2017 season had 737 fires and the ten year average is 729 fires.

The Ontario Fire Service Advisory (Section 21) Committee on Occupational Health & Safety is a sub-committee under the wing of the Ministry of Labour.

The Section 21 Committee is comprised of:

Purpose of this committee is to advise and make recommendations on matters relating to the occupational health and safety of all firefighters in the Province of Ontario; in this, they also develop and maintain a manual of Health and Safety Guidance Notes to aid fire departments in fostering best practices. In most cases these Guidance Notes are dovetailed into municipal fire department Directives and Standard Operating Procedures.

It was my pleasure to write an article for the FFAO’s AGM & Convention Magazine on behalf of the CVFSA; and on Saturday, August 4th attend their AGM to express well wishes on behalf of our President Graham Pawlett and this our Association.

In April of 2013, the Office of the Ontario Fire Marshall issued Communiqué 2013-04 announcing the “Transition from Ontario Fire Services Standards to NFPA Professional Qualifications Standards”; and in January of 2014 the Office of the Fire Marshall issued Communiqué 2014-04 announcing “Transition to NFPA Professional Qualifications Standards: Grandfathering Policy”. This policy permitted fire service members, via their fire department, to apply for grandfathering with applications to be submitted no later than December 31, 2015.

Following Ontario’s transition to NFPA Standards, the Office of the Fire Marshal and Emergency Management struck a roundtable to open and update the Fire Protection and Prevention Act. One result from this roundtable is “Ontario Regulation 379/18 Firefighter Certification” this Regulation will come into force on July 1, 2019 with a grow-in period and will make NFPA Certification mandatory in the Province. Due to the impact this Regulation will have on our service the Grandfathering Policy as mentioned in the previous paragraph was reopened in May of this year and will close on September 30, 2018. Moving forward Ontario’s transition to NFPA and IFSAC accreditation will standardize certification with other jurisdictions.

In addition to “Ontario Regulation 379/18 Firefighter Certification” mentioned above, the roundtable solidified two other Regulations.

Naloxone and the Ontario Fire Service:

On December 7, 2017 the Ontario government announced that they intend to make naloxone opioid overdose kits “voluntary” for all first responders in the province including firefighters. To this day the conversation is alive and well regarding fire service use of overdose kits. Not all fire departments in Ontario have embraced this responsibility, but on the other hand some fire departments have endorsed a program for carrying, storing and deployment of naloxone. Part of the argument is for the respective fire department to carry an overdose kit just in case a firefighter unknowingly comes in contact with an opioid during the course of their duties and other departments have incorporated naloxone for firefighter and public applications. There were 1,261 overdose deaths in Ontario last year, compared with 867 in 2016. Overdose deaths in Ontario related to opioids increased by 45 per cent in 2017.

The 2018 Queens Park Memorial Ceremony will be held on Sunday, September 30th, 2018 and will honour 43 Fire Service Members including some volunteer firefighters.

The 2018 Canadian Fallen Firefighters Memorial Ceremony was held on Sunday, September 9th, 2018 and honoured 67 members from our diverse service. Presently the national monument has 1440 names inscribed on the wall, from 1848 to present day. The Honourary Host this year was the Department of National Defence Fire Service.

I respectfully submit this report for your information and approval.