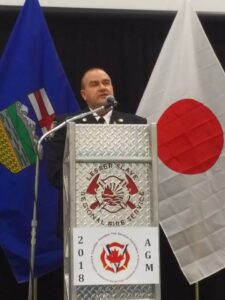 It is with pleasure that I submit the annual report for the Province of Nova Scotia.  2018 has been a busy year in the Nova Scotia Fire Services with several complex and challenging incidents faced by our firefighters across the province.  One of the highlights of 2018 is the continued work on the Nova Scotia Fire Services study that was completed in 2016-17 and continues to move forward with various fire service members and other stakeholders meeting to facilitate positive change within service.  In 2016 – 2017 Pomax conducted a review of fire services in Nova Scotia, from a municipal perspective, on behalf of the Union of Nova Scotia Municipalities (UNSM) and the Association of Municipal Administrators, Nova Scotia (AMANS). The associated tasks included facilitating eight meetings with municipal officials and fire services across the province and identifying and prioritizing issues, concerns, and opportunities for municipalities as it relates to fire services.  The final report took provincial legislation into account and classified and prioritized key issues in the delivery of fire services from the perspective of those who provide fire services, and those who oversee and finance fire services at the municipal level, identified options to address issues and possible areas for collaboration, and identified best practices in the delivery of fire services in urban and rural settings.

The province of Nova Scotia is served primarily by volunteer firefighters in the rural regions with career firefighters in some of the larger towns and cities.  In total, there are approximately 320 fire stations throughout the province.   Approximately 2100 firefighters are also registered Medical First Responders providing medical response to their communities in coordination with Emergency Health Services (EHS), the provincial ambulance service.   Several departments work collaboratively in their municipalities to provide additional services such as high angle rescue, hazmat, and water rescue.   This makes for a very successful response model within our province.  The Firefighters Association of Nova Scotia (FSANS), along with the Office of the Fire Marshall work collaboratively, in conjunction with the municipal units, to support the fire service with programs, training and funding initiatives to assist the fire service in Nova Scotia.

Throughout 2018 there were several incidents that challenged our first responders.  There has been an increase in the number of fatality fires including a very tragic fire in Pubnico where 4 children perished in January 2018.  These unfortunate tragedies have shown the ongoing need to continue aggressive fire safety and prevention programs, along with support for PTSD programs throughout the province.   September 2, 2018 also marked the anniversary of the Swiss Air tragedy, of which the impacts are still felt greatly amongst all the first responders who worked at that disaster. Other significant fires included a major fire at the historic Inverary Inn in Baddeck; Dalhousie Agriculture College building in Bible Hill; multiple arsons fires throughout Cumberland County and the Annapolis Valley and a landfill fire near Chester, Nova Scotia.  Despite all these challenges, our Nova Scotia firefighters handled each incident with professionalism and pride.

Several of our firefighters were honored with the CVFSA long service awards.  We take this opportunity to recognize and applaud each of them for the commitment and sacrifices made to each of their communities.  Thank you.

The CVFSA recognizes the efforts of Chief Joe MacDonald, Barney’s River Volunteer Fire Department, on his petition to have the deadly Highway 104, a major thoroughfare in Nova Scotia, twinned.  His efforts were realized in July 2018, when Prime Minister Trudeau and Premier MacNeil announced funding for this project.

The CVFSA also recognizes the efforts of our Nova Scotia wildland fire crews.  Crews were deployed to both Ontario and British Columbia to help in the efforts to control major wildfires in those provinces.

Our Nova Scotia firefighters continue to show leadership and innovation in emergency services through training, programs, building of sustained infrastructure and unique incidents that challenge our first responders.   I am honored to be part of this team and proud of the work we do for our communities every day.